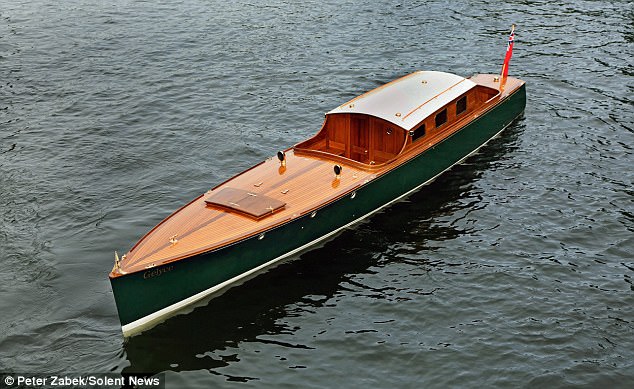 After a successful restoration process, a historic motorboat that was used in the 1930s is now valued at £2 million, just two years after it was acquired for £20,000. The boat is among those that sailed the America’s Cup in the 1930s. Built by Camper & Nicholsons (oldest leisure marine company) in 1930, Gelyce measures 50ft and is one of the best masterpieces done by Camper & Nicholsons.

The vessel was handed to Sir Thomas Lipton, a legendary yachtsman, as a tender for Shamrock V, a J Class racing yacht. Sir Thomas is renowned for the establishment of Lipton tea brand, and his yacht took part in the America’s Cup glory five times.

He was accompanied by King George V and King Edward VII in many of these trips. The vessel was used in many occasions including ferrying spectators about, but when war broke out, her tender was halted and she would be converted to a vessel and was used to help fend off aircraft flying low over the Solent during the Second World War.

As the war proceeded, the vessel remained under the ownership of Hugh Goodson, a yachtsman, who took part in a 1958 Americas Cup Challenge. After this, she changed ownership and was ferried to River Themes, where she was turned to a riverboat. All through the 60s and 70s, the motorboat was forgotten in a boatyard in Hurley and she started to rot away.

By the time she was recovered, she had disintegrated and could barely be recognized. There are photos of the motorboat before restoration that reveal it had holes and its paint was in bad state. In 2015, engineer Wint Taylor purchased the motorboat at a price of £20,000. He is a wooden boat restoration enthusiast and engineer, so he invested his passion and time in this project.

For the restoration work – which was done by Classic Restoration Services, based in Windsor, Berkshire – Mr Taylor spent an additional six figure amount. At completion, consensus enthusiasts argue that she would be valued at about £2 million, which is calculated based on previous sales.

Only nine motorboats similar to Gelyce were built by Camper & Nicholsons between 1912 and 1930, and a few of them were reserved for members of the Nicholson family. Its name, Gelyce, was created from an amalgam of the names of the wives of Nicholson’s brother (Gertie, Lucy and Constance).

After a complete restoration process, Gelyce is now finished to the highest standard possible. It was finished with three layers of mahogany and modern epoxy that are held together by 75,000 polymer staples. Both its superstructure and interior were retained and refurbished.

The deck and instrument panel, as well as cabin fittings, came gold plated to allow easy care, and its reason is to make it secure from erosion. The boat runs a Rolls Royce aluminium mid-1960’s engine that produces 175 horsepower, and this makes the boat capable of attaining speeds of up to 28 knots. Engine restoration work was done at Tim Walker Restorations by Brian Bax.