Doors have always provided us with a sense of privacy, safety and security. This is why they represent some of the most important portions of our homes. 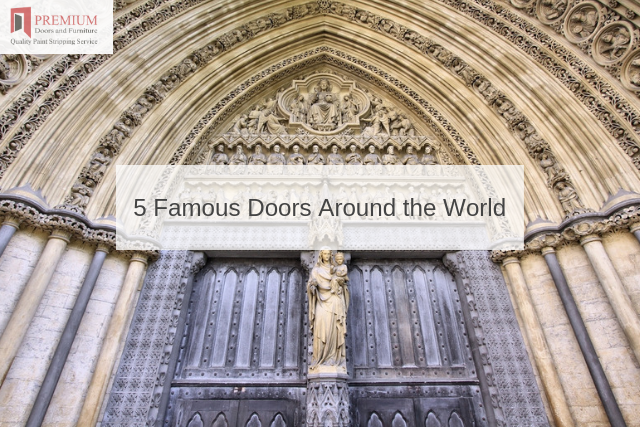 However, a handful of these structures have actually become quite famous. Let’s take a look at five well-known doors from around the world.

This iconic black door has existed in the same form since as far back as 1772. However, it was replaced with a matching blast-proof version after an IRA bombing that took place in 1991.

This ornate door was built to commemorate the life and achievements of Christopher Columbus. It depicts various events which were deemed historically important and the brilliant bronze surface of this door certainly deserves a closer look.

This famous abbey is known as housing the graves of such famous icons as William Shakespeare. However, relatively little attention is given to the door located at its entrance. Recent studies have confirmed that this door was actually erected as far back as 1050 CE.

The Door of St. Peter’s Basilica

St. Peter’s Basilica is already well known for its numerous works of art. However, the architecture associated with this massive church (the largest in Europe) is just as impressive.

A northern door is actually one of its best-kept secrets, as it can only be opened by the pope himself once every 25 years. It is said that passing through this entrance represents the symbolic act of the transition from this life to the next.

This hotel was originally erected in 1871 although it unfortunately burned down a mere 13 days after its opening. The structure was rebuilt in an even more opulent manner and one of the most stunning examples of the Art Deco style can be seen in two very large bronze doors. Located on Monroe Street, each is adorned with a large peacock.

We should always mention that restoring an old door to its former glory is an excellent way to celebrate the past. Premium Door Stripping is here to help.